Click here for PDF file "Ezekiel 1-29 Decoded" produced from this webpage. Can be saved, emailed and printed

Ezekiel has written ... do NOT compare or preempt with any existing assumptions ...
Consider the exiles are recalling a great event handed down through generations for two thousand years.
Construction time of all Pyramid building on the Giza plateau amounted to around one hundred years, equal to four generations of builders,
hard work, but majestic, unique and not easily forgotten.
This section of Ezekiel (1- 29) deals with a gathering of exiles providing an historical vision for an event their ancestors witnessed.
Where Ezekiel takes this historical event I have no firm ideas about because de-coding takes years.
Ezekiel has confirmed the Four Lobe Pinion Pulley was used to build Khufu's Great Pyramid using torchlight when required.
Ezekiel has provided the first Great Pyramid historical document (c.590 BC) and Herodotus has provided the second (c.450 BC). These two are the only historical documents known to exist.


1 In my thirtieth year, in the fourth month on the fifth day, while I was among the exiles by the Kebar River, the heavens were opened and I saw visions of God.

3 the word of the Lord came to Ezekiel the priest, the son of Buzi, by the Kebar River in the land of the Babylonians. There the hand of the Lord was on him.

4 I looked, and I saw a windstorm coming out of the north—an immense cloud with flashing lightning and surrounded by brilliant light. The center of the fire looked like glowing metal,
(Read windstorm as a great event about to be retold ... wind means talk and news ... wind occurs when people talk ... breath. North refers to Northern Egypt ... Cairo ... Giza)
5 and in the fire was what looked like four living creatures. In appearance their form was human,
(Read ... fire as torchlight) (Read ... In appearance their form was man-made (manufactured ... fabricated by human beings ... carpenters to be specific) (Read ... 'living creatures' to be the wooden manufactured pulleys could lift, carry and move as if alive as machines appear to be)
6 but each of them had four faces and four wings.
(The faces of pulley lobes had projecting cross-pegs which can be viewed as being 'eyes all around'. Wings are pulley lobes)
7 Their legs were straight; their feet were like those of a calf and gleamed like burnished bronze.

8 Under their wings on their four sides they had human hands. All four of them had faces and wings,

11 Such were their faces. They each had two wings spreading out upward, each wing touching that of the creature on either side; and each had two other wings covering its body.

12 Each one went straight ahead. Wherever the spirit would go, they would go, without turning as they went.

13 The appearance of the living creatures was like burning coals of fire or like torches. Fire moved back and forth among the creatures; it was bright, and lightning flashed out of it.

(Building the Pyramids in the cool night air required torchlight)
Lighten our darkness, we beseech thee, O Lord; and by thy great mercy defend us from all perils and dangers of this night; (for the love of thy only Son, our Saviour, Jesus Christ.) Amen.
Literally the immediate dangers were two ton blocks of sandstone being hauled and raised for the Great Pyramid of Khufu. Khufu was Lord - "The Power and the Glory for Ever and Ever" embodied within an everlasting design, stable, robust structure of a four sided stone Pyramid.

14 The creatures sped back and forth like flashes of lightning.

(Lighting is very quick and raising Pyramid blocks was being done quickly, paced against the uplifting spirits within the machines provided comradery which united the work gangs)

15 As I looked at the living creatures, I saw a wheel on the ground beside each creature with its four faces.

16 This was the appearance and structure of the wheels: They sparkled like topaz, and all four looked alike. Each appeared to be made like a wheel intersecting a wheel.
(Topaz - the colour of Lebanese Cedar wooden pulley lobes - evidence of forty shiploads of imported Lebanese Cedar on the Palermo Stone) 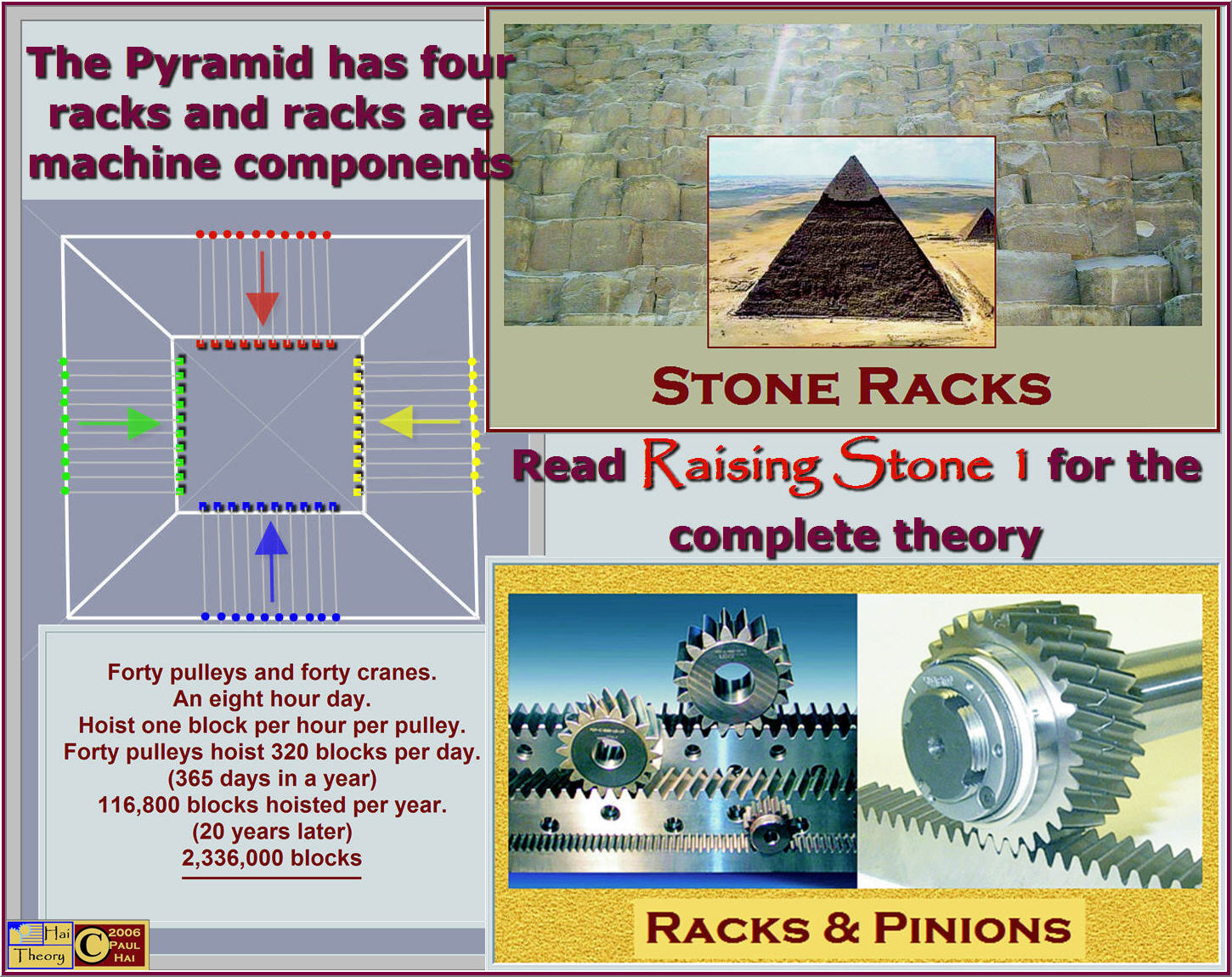 18 Their rims were high and awesome, and all four rims were full of eyes all around.

22 Spread out above the heads of the living creatures was what looked something like a vault, sparkling like crystal, and awesome.
("Sparkling like a crystal" - like a four-sided crystal gemstone of pyramid shape and "awesome" - fantastically bigger than any gemstone crystal could possibly be)
(The white Tura limestone outer casing of the Great Pyramid was literally dazzling and reflected blinding sunlight during the day.) 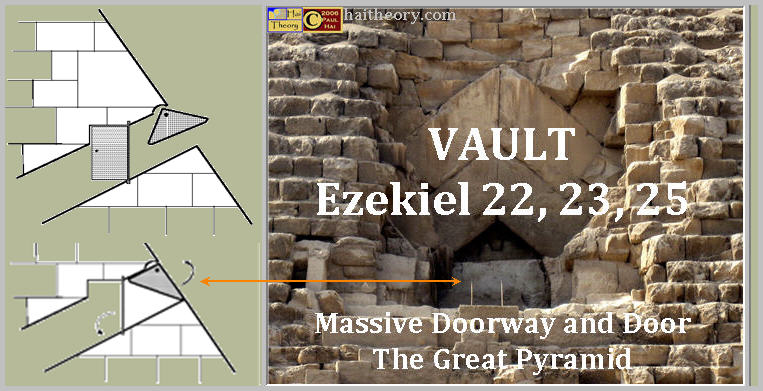 23 Under the vault their wings were stretched out one toward the other, and each had two wings covering its body.

24 When the creatures moved, I heard the sound of their wings, like the roar of rushing waters, like the voice of the Almighty, like the tumult of an army. When they stood still, they lowered their wings.
(Read ... the vast workforce was operating as an army does according to orders. When ordered to stop working the machines are rested and the workers stand to attention)
25 Then there came a voice from above the vault over their heads as they stood with lowered wings.

26 Above the vault over their heads was what looked like a throne of lapis lazuli, and high above on the throne was a figure like that of a man.

28 Like the appearance of a rainbow in the clouds on a rainy day, so was the radiance around him.
(Read ... Pharaoh Khufu (seated on a chair ... 26) was at the vaulted entrance above the workforce. Behind him, brilliant white Tura limestone like a white sky on a rainy day ... Not the normal blue Egyptian sky) (Read ... 'rainbow in the clouds' as Pharaoh Khufu's NEMES head dress has coloured stripes which appear as a rainbow against the white Tura limestone. The Tura limestone is as white as clouds are white)
29 This was the appearance of the likeness of the glory of the Lord. When I saw it, I fell facedown, and I heard the voice of one speaking.
(Read ... Pharaoh Khufu has arrived and makes a speech)
Notes for 2600 BC on Egyptian Religion, Language and more:
Verse 28 ... 'on a rainy day'. In hot climates heat haze compromises vision to varying degrees and by comparison on a rainy day vision is extremely sharp and very clear.
God's name is Ra, God is the Sun, Ra is the name of the Sun which is worshiped as the giver of all life.
The Chinese language is six thousand years old and the word for sun is ri with a soft r. Another word re in Chinese means hot.
English: Hot, Pinyin: rč re.mp3

Da jin zi ta ... Great Gold Capped Temple is the Chinese term for The Great Pyramid. Herodotus walked around the Great Pyramid c.450 BC and reported the Pyramid to be capped with gold.